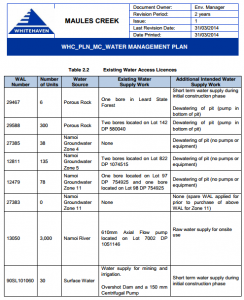 The Maules Creek coal mine owns the 78 ML “Green Gully” water licence 12479 which is subject to the cease to pump rules in the Namoi WSP when less than 1 ML per day is flowing across Elfin Crossing.

The Porous Rock licence was granted just 4 months prior to the mines state planning approval on the 23rd of October 2012 and just 18 days after the Namoi WSP commenced on Oct 4, 2012.

The “Green Gully” 78 ML per annum licence is sufficient to cover the .25 ML per day that the groundwater modelling in the EIS estimated would be lost from from Zone 11 groundwater.

The WSP definition of Porous Rock would include coal seams.

“Porous Rock” means consolidated sedimentary rock containing voids, pores or other openings (such as joints, cleats and/or fractures) which are interconnected, in the rock mass and which are capable of transmitting water.

However the real world situation is not so cut and dry. We know from the geology of Maules Creek that the coal seams within the Maules Creek pit could extend out to underlie, intersect or otherwise connect to the Maules Creek alluvial aquifer.

But, unfortunately the Namoi WSP Part 1, section 4 (5) (a) specifically excludes water from the Porous Rock from water sources managed under the WSP.

This means that water pumped from the coal seams that originated from the alluvial aquifer could circumvent the Namoi WSP cease to pump triggers.

If there is any suspicion that the alluvial aquifer water that was running across Elfin Crossing is now draining into the mine pit, for full transparency, the de-watering pump should be metered like other pumps in the region. Then the groundwater model can be independently verified.

The Maules Creek mine NSW planning approval provides a mechanism for independent verification of the groundwater model. It might be time to do just this.

Section 40 of the PAC approval concerning the Water Management Plan says that the proponent shall prepare a plan that is acceptable to the Secretary of the Dept of Planning including a 3 yearly independent review of the groundwater model and a plan to “respond”.

This Map and the legislative detail of the Namoi WSP for the Unregulated and Alluvial Water Sources is made under section 50 of the Water Management Act 2000. 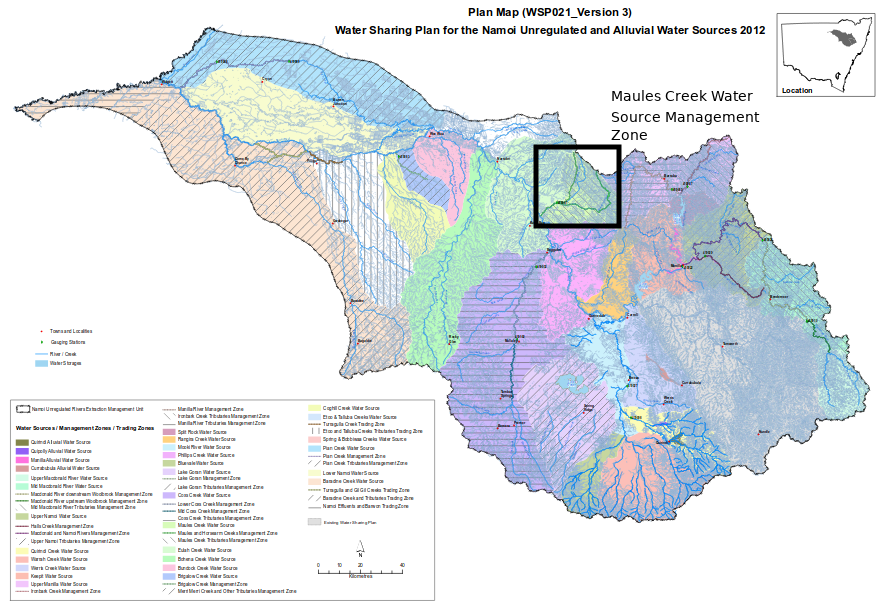 According to the Namoi WSP, the Namoi Unregulated Rivers Water Sources include all water:

(a)  occurring naturally on the surface of the ground within the boundaries of the Namoi Unregulated Rivers Water Sources shown on the Plan Map, and

(b)  in rivers, lakes and wetlands within the boundaries of the Namoi Unregulated Rivers Water Sources shown on the Plan Map.

These water sources do not include water:

(a)  contained in any fractured rock or porous rock,

(b)  contained in the water sources to which the following water sharing plans apply:

(i)  the Water Sharing Plan for the Upper Namoi and Lower Namoi Regulated River Water Sources 2016,

(c)  taken under a floodplain harvesting access licence with a share component that specifies a water source to which this Plan does not apply,

(d)  contained in the sections of the watercourses specified in Column 2 of Schedule 1.

Despite the presence of Stygofauna in the Maules Creek Alluvial Aquifer, the Namoi WSP does not identify any high priority GDE’s.