Maules Creek geology and our water

Maules Creek geology has a lot to do with the groundwater behaviour in the area. The above map was taken from the Upper Namoi Groundwater Source Status Report – 2006 – 2011, which provides a useful summary of groundwater history in Maules Creek – pre-mining.

The Status Report makes it plain the financial and operational pain that groundwater entitlement holders have shouldered, with allocations reduced by 75% in order to stabilise the declining groundwater levels in the district;

“At the commencement of the Plan on the 1st November 2006 groundwater entitlements in the Zone 11 were reduced from approximately 8.7 GL down to 2.2 GL.“ 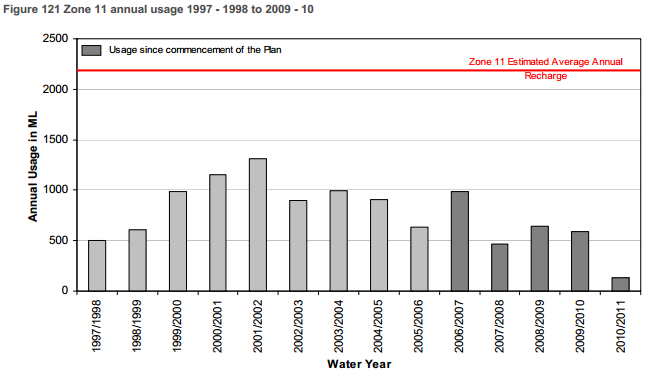 The objectives of the Plan were largely achieved by 2011 with a significant reduction in entitlements and annual groundwater usage, well before the 2016 – 2017 deadline.

Ironically, 2016 – 2017, could contain the biggest threat to Zone 11 groundwater levels that we’ve seen. And this threat could come not from the irrigation industry but from the connectivity of the alluvial aquifers with the coal seams  which underlie much of Maules Creek. 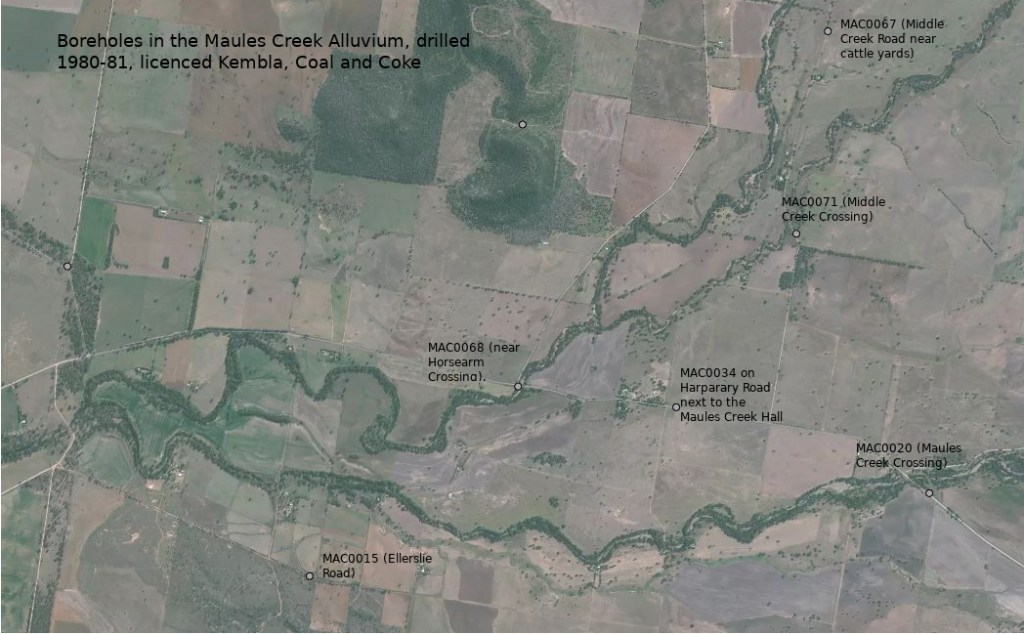 A map of the Maules Creek Alluvial Aquifer can be seen here.

This map taken from the Aston Resources EIS shows Maules Creek running above and adjacent to the shallow coal seams. 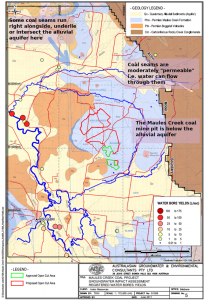 It hides the known extent of the coal seams that underlie the alluvium.

Its a real worry, as attested by the unconstrained pumping and rapidly declining groundwater near Chinchilla in Queensland due to CSG pumping. The pumping clearly illustrates that coal seams are permeable and transmit water – and that aquifers can dry up entirely if the extraction from the coal seams is allowed to continue.

It is a strong warning for Maules Creek residents. If the Maules Creek alluvium is directly connected to the coal seams or is affected by faults or other mechanisms, there is nothing to stop that groundwater flowing all the way to the coal pit operated by Whitehaven.

Because there are a number of coal seams in the Maules Creek area, only one or some of the seams are needed to transmit water and the original Groundwater Impact Assessment by AGE in the Aston EIS said as much on page 38;

“It can be seen from Figure 10 that the upper seams in the sequence are incomplete having been eroded by peat drainage systems and are therefore limited in extent and controlled by topography. This means that some of the shallow seams in the sequence do not extend under, or have a direct hydraulic connection to the alluvial aquifer as they do not form continuous layers on a regional scale.”

Said another way, some of the shallow seams do extend or have a direct hydraulic connection to the alluvium.

Now, 5 years on, it is incomprehensible that a precautionary approach was not taken prior to coal development. The rampant greed was a very ugly sight and with the high risk to our groundwater it is no wonder the donations flowed to smooth the way prior to the mines approval.