Groundwater levels are on the decline in Maules Creek. The graph (above) of the Green Gully groundwater monitoring station (GW967138.1.1) shows a decline in levels since mid 2016 with the short term graph below showing a 20 cm decline in the last 30 days with the station recording .5 C warmer groundwater. 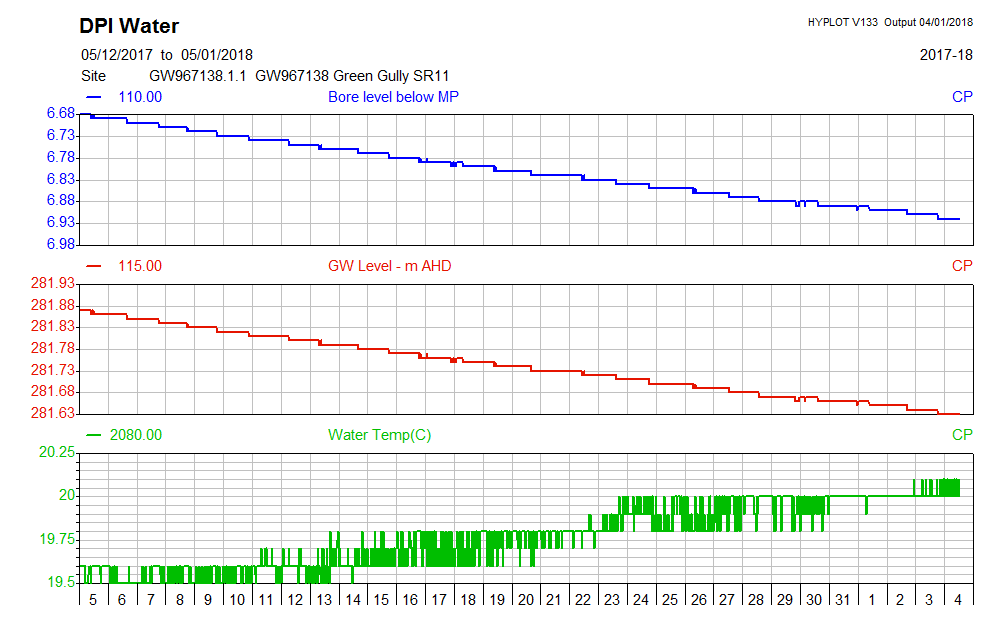 This is confirmed by the Thornfield groundwater monitoring station (GW041027.1.1) short and long term graphs. The data shows that the situation is more pronounced further up the catchment with the long term graph showing groundwater levels at historical lows in upper Maules Creek.

Anecdotal evidence is that a number of bores in the district are starting to run low and some residents are seeking alternate supplies or cleaning out their bores to improve flow.

While fluctuations in the water table are normal the current situation is of concern because the district is not even in drought.

At Elfin Crossing the groundwater monitoring station (GW967137.1.1) shows that water levels have declined by 6 cm over 30 days. Long term levels (below) appear to have remained comparatively constant over 2017. 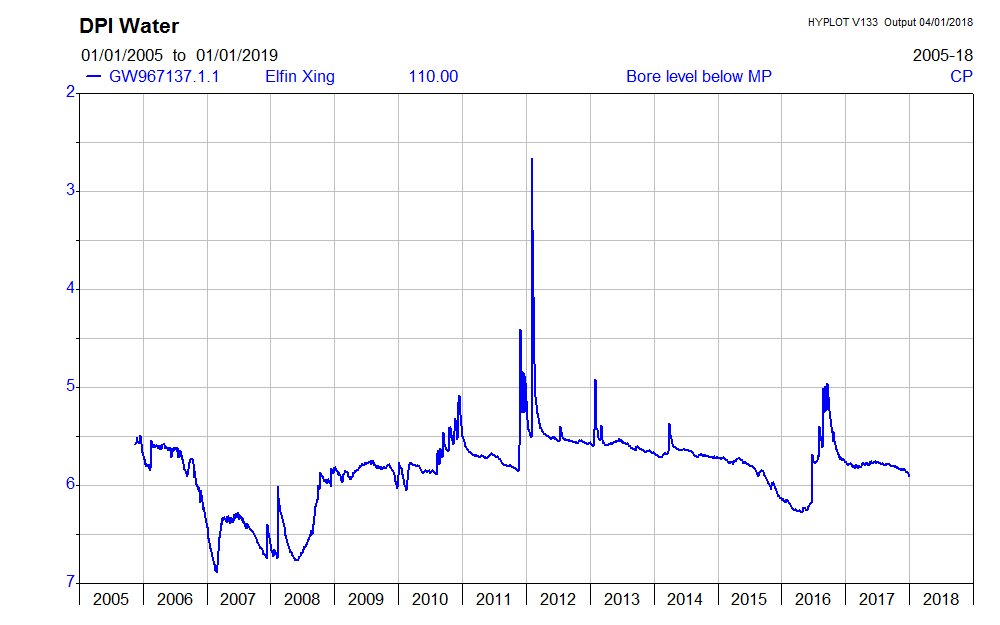 This tells us what we already know: average rainfall is not enough to maintain groundwater in our district without regular surface water flows in the creeks to recharge the aquifer. The longer we go without stream flows, the less water there is in the aquifer – and the more important reliable groundwater becomes.

This situation can be exacerbated by:

All could have big impacts for Maules Creek residents. When things are finely balanced, transparency of water use is paramount with reliable, real time data a necessity. 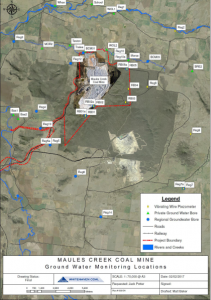 Despite there being a dozen or more mine owned water monitors as shown by this map, none of this data is available in real time. Nor is there objective data of rainfall and runoff diversion from the Maules Creek catchment. All residents have to go on is this short report of mine water usage via the Maules Creek coal mines water balance in the 2016 Annual Review.

The water usage report indicates that there is negligible groundwater inflow into the pit but mentions significant capture of rainfall and runoff of 1860 ML. It appears that captured rainfall and runoff is not objectively measured. The figure is difficult to substantiate as it is based on predictions in water balance modelling conducted way back in 2014.

This means mine owned groundwater data and surface water capture data is not available in real time, nor can it be independently verified.

Groundwater shortages are beginning to be an issue now in early 2018 and the yet the best information that we will have, the 2017 Annual Review, is still a way off.

In the event of a landholders bore failure, the coal mine at Maules Creek says in it’s current Water Management Plan (last revised in 2014);

“Should the Project be determined to impact on the water supply at any privately owned bore, Maules Creek Coal will provide a suitable alternative water supply in consultation with the landholder. The process of determining the impact on the privately owned bore will also be undertaken in consultation with NOW and to the satisfaction of the Director-General, consistent with Statement of Commitment no 24 and Condition 40 of PA 10_0138.

Should drawdown attributable to mining be detected within any private bores within the predicted zone of depressurisation, the need to expand the bore census beyond the area visited as part of the 2011 EA will be assessed. A more expansive bore census will also be undertaken should any updates to the groundwater model indicate a more extensive zone of depressurisation.”

With the current information “asymmetry” landholders will find it difficult to determine where the fault may lie.

Details of bore numbers on your property and other helpful NSW Government water links can be found here on the MCCC website.

Further information about the Connected Waters Study from the UNSW that is developing tools to investigate the connectivity between surface and groundwater (and is based on research conducted at Maules Creek), can be found here.