An initiative of the Leard Forest Alliance

Everyone is welcome to this free entry event with a programme of activities aimed at informing the community about the protests against the Maules Creek coal mine, and the destruction of Leard Forest. Guests will be greeted by the sound of Leard Forest birdsong, and reminded that this sound is doomed to be forever lost to the world if Maules Creek mine proceeds. 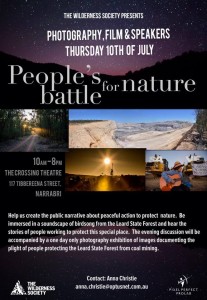 40 prints on exihibition are for sale, raising funds for the campaign to Save Leard Forest. This exhibition is touring Sydney – Melbourne – Armidale – Narrabri.

Fight for Leard Forest is a 20 minute documentary by ﬁlmmaker Leighton Donnelly, who captured footage over a period of several visits to the Leard Blockade.

Why are so many people defying the law to save Leard Forest?

A panel of community members will explain why the Maules Creek coal mine should never have been approved, and the motivations which lead people to commit acts of civil disobedience to demonstrate against the actions of Whitehaven Co

Unbeknownst to most people, Leard Forest is teeming with wildlife, and represents a unique and valuable ecosystem in which many plants and creatures are already listed by the NSW Scientiﬁc Committee as “vulnerable” or even “critically endangered” under NSW law. Koalas, microbats, snakes and birds are among the vanishing species.

Maules Creek coal mine threatens to make many of the bird species extinct. Children’s activities seek to inform children aged K-6 about 7 of the endangered bird species.