Submissions to the NSW ‘Planning’ Dept were due yesterday 8.6.2020 to respond to a Whitehaven coal Environmental Assessment known as MOD 7. MOD 7 proposes to extend the mine pit right up to the Namoi Alluvium and remove the current planning approval requirement to construct a “Low Permeability Barrier” that protects groundwater from flowing into the open cut coal mine. In its own words MOD 7 said; 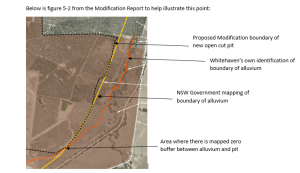 The adjacent image shows that the pit may intercept the Namoi alluvium along a significant portion of the pit boundary, potentially leading to huge unregulated inflows. This is precisely the sort of thing that the Aquifer Interference Policy that was introduced but not activated by the coalition government in 2012 was meant to address.

MOD 7 envisages a network of new pipelines, that with existing water transfer arrangements 2, will enable the movement of unregulated Namoi alluvium water to or from other mine sites such as Vickery and Maules Creek including water from sites outside the water zone of origin.

Basically, MOD 7 has all the hallmarks of an old fashioned water grab of unregulated pit inflow, or the so called “passive take” relied on the recent Maules Creek groundwater investigation. The modification is designed to literally remove all barriers to passive take and to go one step further, building a network of pipelines to facilitate the use of pit inflows all around the region.